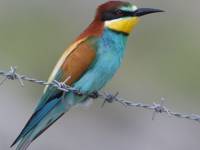 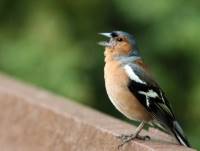 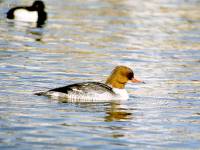 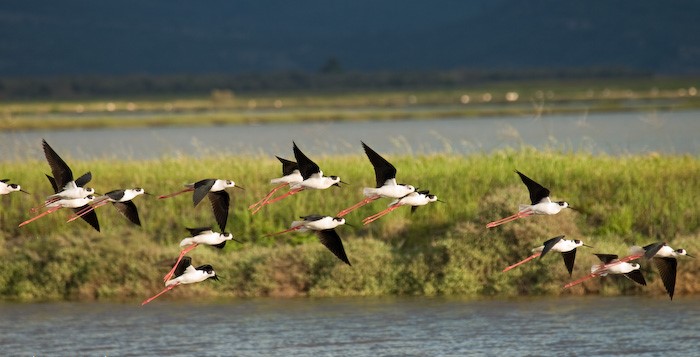 The Wetland of Kallonis Gulf is one of the most significant parts of the ecologic assets of Lesvos.
A magnet for alternative tourism, the Bay of Kalloni is well-known abroad as a favorite birdwatching destination. The entire marine area encompassed by the bay together with the wetlands around its perimeter comprises an ecosystem that is particularly important for the impressively large variety of bird species that are observed here.
The area around the gulf , belongs to the European program “Special Areas of Nature Preservation” of Natura net 2000.At present 134 species of birds have been registered. The 66 of them are migratory without having included the particular species of the neighbouring terrestrial ecosystems. That's why Skala Kallonis is the islands bird watching centre in early spring and late in the Autumn.
Unquestionably, the major spot for birdwatching throughout the year is Alyki in Agia Paraskevi, where the Municipality has erected an observation post. The importance of the place is evidenced by large numbers of birdwatchers who regularly gather here. These visitors come to Lesvos, mostly in the spring (from mid April to late May), to observe the summer migration of birds from Africa, where they have spent the winter, to Europe, where they will arrive to reproduce in the spring and summer.

Polichnitos, at the southeast side of Kalloni Gulf, is a special wetland. More than 100 bird species have been recorded, some of these are emigrational. Biologists and amateur bird watchers this place is a live history museum. Bird watching is possible all over the year, especially in spring that there are more species.
Species like swans, pink flamingos, white storks are only a few of the kinds that can be observed. The terrestrial wetlands of Polichnitos are important parts of the area. Reptiles, mammals and amphibian find shelter there. Turtles, foxes, lizards, bats complete the scene. Between the animals the squirrel "Sciurus Anomalus" lives only here. Apart from the fauna, special place has the flora also. Oak trees, apple trees, roses, mint, wild herbage, mushrooms e.t.c complete the beautiful scene.

Bird-watching is a widely spread activity, what will develop more in the future thanks to the infrastructure, that is going to settle there (observation posts, Environmental Informing Center, e.t.c.). The area shows great interest, since is full of trees, plants, olive trees, pine trees, many kinds of orchids, small animals and has great ecological importance for Lesvos island.

The island of Lesvos, boasts a very diverse population of both plants (over 750 species) and animals. Over 120 different species of orchids, some very rare types grow on the island, such as the Himantoglossum comperianum (comperia comperiana) and the Platanthera holmboei. Many scientists and naturalists also visit the island of Lesvos for lizards, snakes, dragonflies and tortoises!!