The area of Kalloni blessed by nature, with the waters of the gulf around her, the rich valey of 100 square kilometers and the historical Monasteries, I.Moni Limonos and the I.Moni Panagias Mirsiniotisas, be her guards, was always a crossroad, from where the basic roads where passing.

The name of the town come from Kall which is relevant with beauty,but is refered to clear and pure water and the suffix -oni that means, territory and country. Additionally the town is the second largest commercial center of the island after the main city.It has commercial stores, taverns, banks and whatever someone could use for a pleasant stay.

Skala Kalloni that abstains 4km from the town constitutes important tourist resort.The region has extensive sandy beaches, with shallow hot waters and a lot of shells. The harbor with the traditional ships and little boats with their light colours, make an exceptional scenery. In the coastal cafeterias you can enjoy your coffee or your refreshment.

This beach is located in the Gulf of Kalloni, 44 km on the north-west of Mytilene. It is a well-organized beach (umbrellas and chairs) with cafes and restaurants, which also offers the possibility to practice water sports. Distinctive features are the sand and shallow waters, where you can also admire the beautiful pelicans. Near the beach there is the village of Kalloni.

The area has long and very well-organised beaches with warm, shallow, water, attracting many tourists. Skala Kallonis is particularly famous for its sardines, also known as “atherina”, one of the best summer delicacies. Every summer, as part of its cultural events, the municipality organises the “Sardine Festival”, which attracts a lot of people.

The delicacies of gulf, that first studied by Aristoteli and later by his students, like oysters, fish, sardines, create a unique experience for the visitor... 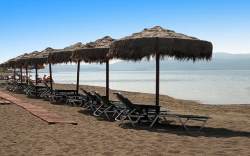 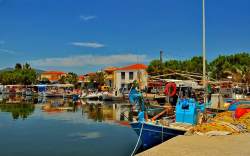 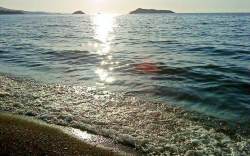