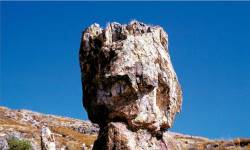 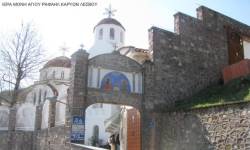 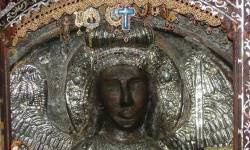 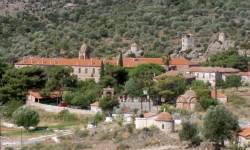 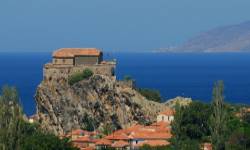 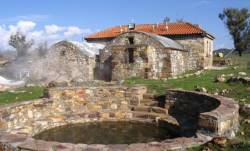 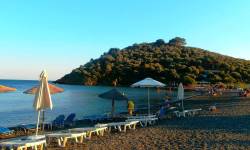 The Natural History Museum of the Petrified Forest was established in 1994 and its mission is the protection, preservation and study of fossils. It has been declared as a protected monument of Nature by UNESCO with huge environmental, geological and paleontological value. The museum is a window into the history and evolution of the Aegean basin in the last 20,000,000 years.
Of course, you must visit the petrified forest park in Sigri, with a total area of 286 acres, and the Geopark in museum with rare plant fossils and volcanic rocks.

Above the town of Termi, on the hill "Karies" is the monastery of Saint Raphael with its unique two-story church. Here are kept the relics of Saints Raphael, Nicholaos and Irene, who were martyred at the hands of the Turks and their bones were found after visions seen by believers.Among the Saints and Martyrs of the Christian Orthodox faith the recently revealed Saints of Lesvos, Raphael, Nicholaos and Irene hold a special place.

In Mantamado is one of the most important shrines of the island, the Holy Monastery of Taxiarches. The Commander is the patron saint of the region but also throughout the island. H Taxiarhes miraculous image of Michael, is unique in the world of Christian Orthodoxy. because this is a relief and sculptured images are not allowed in our Eastern Orthodox Church but it remained thanks to its spiritual value.

It figures among the most important monasteries of Greece for it houses priceless artefacts of unique historical significance. More often than not it is described as the miniature version of the monastic town of Agio Oros located on Mount Athos.

Dedicated to St John Theologos, the Ipsilou Monastery is located on the western side of the island (just before the town of Sigri) right at the top of Mount Ordymnos.

At the centre of the village lies the Church of the Assumption of the Virgin Mary. The church is primarily well-known for the miraculous icon of the Virgin Mary holding baby Jesus (in Greek it is called “Panagia Vrefokratousa”). The church houses an ecclesiastical museum where a valuable collection of manuscripts, ceremonial vessels and other ecclesiastical items are exhibited.

The Church of the Virgin Mary the sweet kiss (in Greek Panagia i Glykophilousa) is built at the top of a 40-metre high rock! 114 steps carved in hard stone, lead the visitor to the beautiful church with spectacular view that attracts swarms with pilgrims every August from around the globe.

One striking feature of the island are the many hot springs. One fourth of the hot springs of the country are here! The hot springs of Lesvos have been known since antiquity for their beneficial properties. Today, some of them have baths and can accept visitors. The springs are:

The beaches of the island present a great variety. Other small and quaint, and other large and worldly. As for their water is crystal clean and will satisfy all tastes. Other beaches have warm water such as the Gulf of Kalloni and Gulf of Gera and others have colder waters such as those that are open towards the Aegean Sea.